Dr. Suess, aka Theodore Geisel, got the unusual idea to create what he called his "Collection of Unorthodox Taxidermy." Odd, yes, whimsical, certainly. I love them and would welcome any of the heads to my walls. But I wonder what he was thinking: he beheaded his characters and mounted them like animals hunted from the woods. Geisel went so far as to use real animal parts--horns, beaks, and the like-- that he collected from the Forest Park Zoo where his father was superintendent. He invented some odd names for his non living creatures such as: “Two Horned Drouberhannis,” “Andulovian Grackler.” And “Goo Goo Eyed Tasmanian Wolghast.” He assembled these pieces in the early 1930s in his cramped NYC apartment: (The below examples are reproductions) 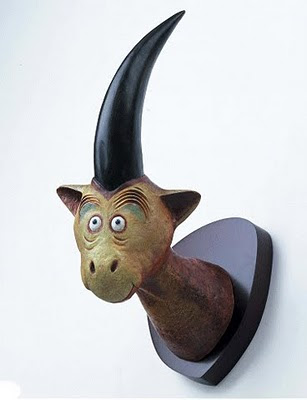 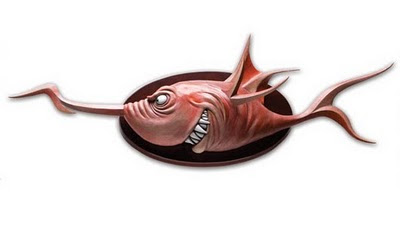 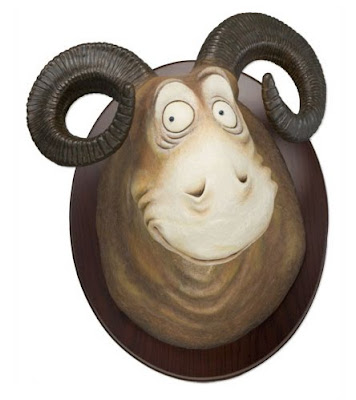 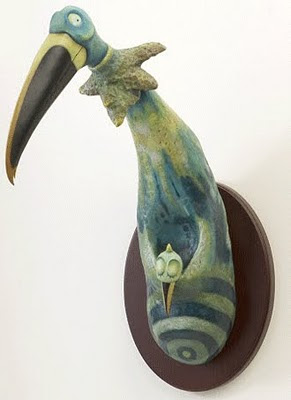 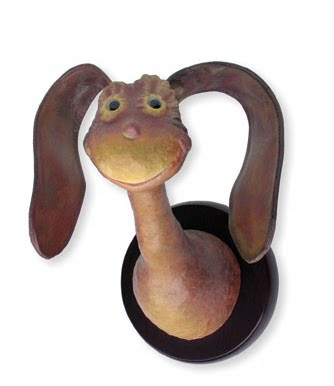 If kids saw these would they get upset--like "Mommy, my favorite character is dead and on a wall!" Or would he/she just like it and smile? I think they're too cute to be upsetting and unless a child is raised by deer hunting folk then they would be fine. I'm not posing these questions because I'm actually concerned, but rather because I wonder, again, what he was thinking. It's a crazy idea! I kind of wish I'd thought of it (I have a warped side to me). Look magazine called him “The World’s Most Eminent Authority on Unheard-Of Animals.” Below is an ad for his taxidermy animals. It reads "DR SUESS RETURNS FROM THE BOBO ISLES... With Rare and Amazing Trophies for the Wall of Your Game-Room, Nursery, or Bar!" Also is a photo of him working on his creations.... 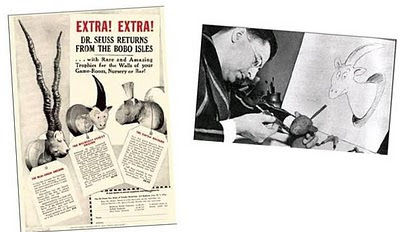 Three of Geisel's original gems were up for auction on Ebay this year! All three were on display at the in a mideival fortress Chateau de Belcastel monument in France. 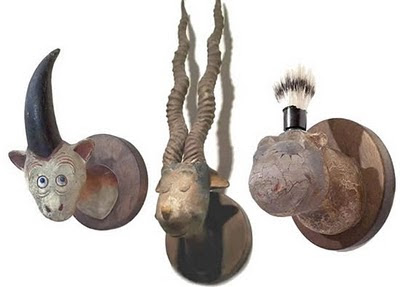 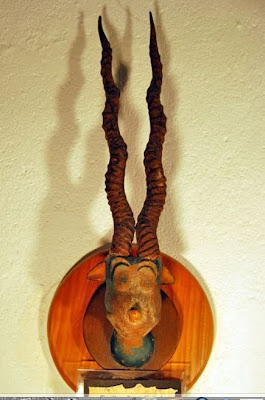 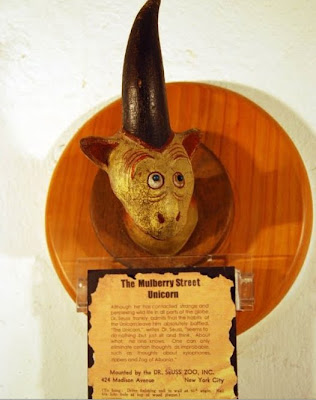 I got this off the Ebay listing:
"Do not mistake these produced originals for the modern day reproductions.
This is the world’s only known complete collection of these creatures; this set of three was purchased in the late 1930’s and has remained intact. Created by Dr. Seuss, these sculptures were first carved from wood, then hand painted and mounted onto small plaques.
This collection would have been originally purchased in the late 1930’s. They were kept in a child’s room, and eventually retired to the storage barn next to a chicken coop in upstate New York. The set was acquired for a substantial sum in 2004. Though aged and weathered, restoration was not considered for several reasons. They are perfectly charming, and the need of a face-lift is a matter of opinion, because the personalities remain intact. The aged quality imparts character and denotes the history of these priceless pieces of Americana. These museum pieces were later copied and reproduced as limited edition sculptures by The Chase Group, the licensee of the fine art property originally created by Dr. Seuss...."

As you can see, they're rather decrepit. In fact, some of the photos make them look downright creepy! For the price tag of one million dollars, I think I'd prefer to pay the thousand and get a reproduction, in full color, so that the characters can properly stare at me with their odd grins... instead of owning ones with paint falling off and one without any eyes. None the less, the triumphant winner of these animals got to fly to Chateau where he or she and a guest were be allowed to oversee the careful packaging and were then able to transport them back, safe and sound, to what I presume was a large white wall. The buyer got to stay for three nights in "the Castle's romantic and luxurious Tower suite." Nothing says romance like packaging Dr. Suess heads! 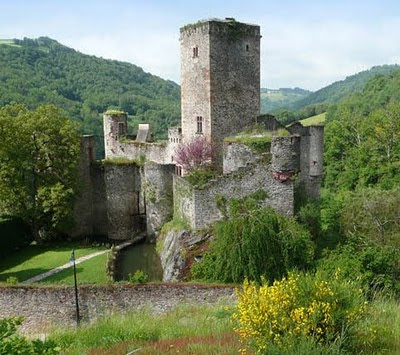 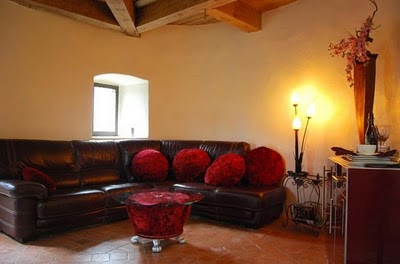 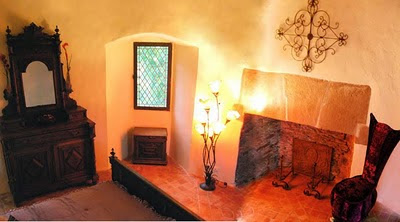