And the word of the year by the OED is... SELFIE! Perhaps you already know about this. Perhaps you take plenty of your own "selfies" or perhaps, like my sister, you are a tad nauseated by the idea. Whatever the case may be, this is the new word according to Oxford. They say that there has been a huge increase in usage of such word and thus the need to make this word the word of the year.

But do you know about "shelfie"? This term is a snapshot of oneself using your camera phone or other device in front of your bookshelf. 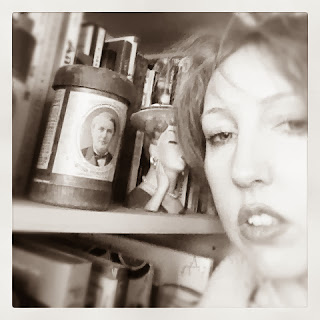 There's a clue in this photo as to what book I'm working on next. I haven't sold it yet but I've been working on it for years and I'm very passionate about it!

Posted by Meghan McCarthy at 1:00 PM No comments:

You haven't heard from me because I'm busy painting. I don't have time to do anything including do normal human activities. Sigh.

Since the start of my new book, these are the audiobooks I have listened to while painting thus far:

THE MAN WHO MISTOOK HIS WIFE FOR A HAT
Oliver Sacks
- I wasn't as interested in this as I would have been if a lot of the medical "mysteries" weren't mysteries anymore. For instance, the man who could not recognize faces is no longer alone. A famous example is Chuck Close the painter: he was interviewed recently on 60 minutes and spoke of his fascination with faces because he could not recognize even his wife's. This book was written in the 70s I believe with updates added at the end of each section. The updates are in doctor speak and I sort of spaced out when those were read.

THE RACKETEER
John Grisham
It was entertaining for what it was. There were so many unrealistic parts to it that I couldn't fully get into the mystery of it all.

THANK YOU FOR YOUR SERVICE
David Finkel
I really recommend this book. So many soldiers come back from the war with brain damage. The suicide rate is high. Their demeanor changes it's not just them who suffers. This book talks about the wives who have to deal with these "invisible" war wounds. It's a sad tale but one that needed to be told.

A WALK IN THE WOODS
Bill Bryson
My dad had hiked part of the Appalachian Trail and had told of people who immerced themselves in the "culture" of the trail. This is an interesting read and made me want to check out the trail for myself.

WHAT CAME BEFORE HE SHOT HER
Elizabeth George
This is extremely well written. It's also a very good story.

DIVERGENT
Venonica Roth
Eh. That's all I have to say about this one.

THE STRANGER BESIDE ME
Ann Rule
This was very compelling. Now I know what you're thinking: here I am painting a kids' book and I'm listening to the true story of Ted Bundy. Hmmm. But I need to keep my mind occupied! And occupied it was kept. Ann Rule worked with Ted at a call center. She was a crime writer who was eventually assigned the job to write about the murders that Ted committed before she knew that he committed them.  Intriguing to say the least. Even though Ann had written about the criminal mind, she too was fooled by this charming psychopath.

THE IMMORTAL LOVE OF HENRIETTA LACKS
Rebecca Skloot
I'm not finished with this yet - halfway through - but it certainly is interesting. What is called the HeLa Cell and is used in everything and has even been sent up into outer space first started with cancer cells taken from Henrietta Lacks. The author goes on a hunt to look for Lacks's relatives to find out who Henrietta was.

Posted by Meghan McCarthy at 1:14 PM No comments:

WELLES'S WAR OF THE WORLDS PANIC MYTH A MYTH? I THINK MAYBE SO.

A new story is floating around town: That the panic that ensued after Orson Welles read his infamous play on air was a myth--one that was fabricated by the newspapers and has been building forming into a bigger and better story ever since.
In Slate Magazine Jefferson Pooley and Michael Socolow write:
“Upwards of a million people, [were] convinced, if only briefly, that the United States was being laid waste by alien invaders,” narrator Oliver Platt informs us in the new PBS documentary commemorating the program. The panic inspired by Welles made War of the Worlds perhaps the most notorious event in American broadcast history.

That’s the story you already know—it’s the narrative widely reprinted in academic textbooks and popular histories. With actors dramatizing the reaction of frightened audience members (based on contemporaneous letters), the new documentary, part of PBS’s American Experience series, reinforces the notion that naïve Americans were terrorized by their radios back in 1938. So did this weekend’s episode of NPR’s Radiolab, which opened with the assertion that on Oct. 30, 1938, “The United States experienced a kind of mass hysteria that we’ve never seen before.”

There’s only one problem: The supposed panic was so tiny as to be practically immeasurable on the night of the broadcast. Despite repeated assertions to the contrary in the PBS and NPR programs, almost nobody was fooled by Welles’ broadcast.

How does Socolow and Pooley claim that this myth began? They blame the newspaper industry, claiming that it had lost revenue to the growing radio and its scheme was to blow Welles’s broadcast so far out of proportion that it would discredit it. Interesting theory indeed! But if their theory is correct then it would be a worse hoax than the broadcast, would it not? For many credible newspapers across the country to purposely write that the broadcast had fooled millions of Americans when it had not, one would think, would eventually become a newsworthy item itself. Wouldn’t a journalist come out of the shadows at some point and write about that? This would be as bad as the U.S faking the moon landing. Well… not quite, but close.

What they complain about most is Hadley Cantril’s book published in 1940 called The Invasion From Mars: A Study In the Psychology of Panic. They claim that Cantril doesn’t have enough facts or the right facts or I’m not sure what. I happen to own the book so for those of you who are curious, I will quote a few pages from it (I cut some paragraphs out for length). Believe me, it’s thorough!

The best direct evidence upon which to base an estimate of the number of people who listened to this broadcast is obtained from a poll made by the American Institute of Public Opinion (AIPO) about six weeks after the broadcast. In a nation-wide sample of several thousand adults, 12 per cent answered “Yes” to a the question “Did you listen to the Orson Welles broadcast of the invasion from Mars” the representativeness of the sample used by the Gallup survey is basted on the characteristics of the “voting public.” It therefor contains more men fewer young people, and probably fewer southern Negros than the actual radio listening public. According to the 1930 census there are 75,000,000 persons of voting age in the country. Twelve per cent of this number would indicate that 9,000,000 adults heard the broadcast. If we consider all persons ten years of age, then according to the 1930 census we shall have 12 percent of 99,000,000 people, or, almost 12,000,000. It is undoubtedly true that many children even under ten years of age listen to the radio after eight o’clock on Sunday evening, especially when we remember that for more than half of the country this broadcast was at least an hour earlier than eight p.m. In addition to these young listeners, a large number of youngsters must have been wakened by frightened parents preparing to flee for their lives.

The AIPO figure is over 100 per cent higher than any other known measure of this audience. However, since the Institute reaches many small communities and non telephone homes not regularly sampled by radio research organizations, its result is probably the most accurate. C.E Hooper, Inc., a commercial research organization making continuous checks on program popularity, indicatives a listening audience of about 4,000,000 to the Mercury Theatre broadcast on October 30, 1938. If we pool the AIPO and Hoooper results, a final estimage of 6,000,000 listeners is conservative. Had the program enjoyed greater popularity, the panic might have been more widespread.

How Many Were Frightened?

In answer to the AIPO question, “At the time you were listening, did you think this broadcast was a play or a news report? 28 per cent indicated that they believed the broadcast was a news bulletin. Seventy per cent of those who thought they were listening to a news report were frightened or disturbed. This would mean that about 1,700,000 heard the broadcast as a news bulletin and that about 1,200,000 were excited by it.

In spite of the attempt to word the question of concerning individual’s reaction in a casual way, it must be remembered that the number of persons who admitted their fright to the AIPO interviewers is probably the very minimum of the total number actually frightened. Many persons were probably too ashamed of their gullibility to confess it in a cursory interview.

Telephone volume. Accounts of frantic telephone calls flooding switchboards of radio stations, news papers and police stations are confirmed by figures secured from the American Telephone Company. An increase of 39 per cent was reported in the telephone volume in metropolitan northern New Jersey during the hour of the broadcast as compared to the usual volume of that hour of the evening. A 25 percent increase over normal in the same area occurred the succeeding hour. Increases for several suburban exchanges on Long Island for the same hours ranged from 5 to 19 per cent. In six suburban exchanges surrounding Philadelphia, traffic increased 9.6 per cent for the entire day of October 30 and for the entire New York metropolitan area traffic was above normal. Telephone officials see no other way to account for the increased volume than assigning responsibility to the broadcast. The managers of 92 radio stations that carried the broadcast were questioned by mail about their telephone volume during and immediately following the program. Of the 52 who replied, 50 reported an increase. Thirty-seven per cent noted increases of at least 500 per cent over the usual Sunday nigh volume.

An analysis of 12,500 newspaper clippings appearing in papers throughout the country during the three weeks following the broadcast, reveals that, although he volume of press notices took the usual sharp decline the second and third days, considerable interest was maintained for five days and had not fallen below 30 percent of the original volume by the end of the first week. (a graph is included).

So I have this to say:
1) why do they question Cantril’s book and statistics?
2)  Do they have a book with different statistics?
3)    Do they have any men who worked for the newspapers who can verify that they did indeed exaggerate or lie to make radio look bad?

Nonfiction is always difficult because there are always gray areas. The further in time you go the more difficult things become. No one is alive anymore to tell you what really happened. But if you don’t have any concrete facts to question thousands of newspaper reports and a whole scholarly case study done at the time then I don’t think you should say anything at all. You should especially not go on NPR saying that you are positive that everyone else is wrong. I mean heck… maybe these guys are right… but how can they be so sure?

Posted by Meghan McCarthy at 1:15 PM No comments: