From the BEA catalog: 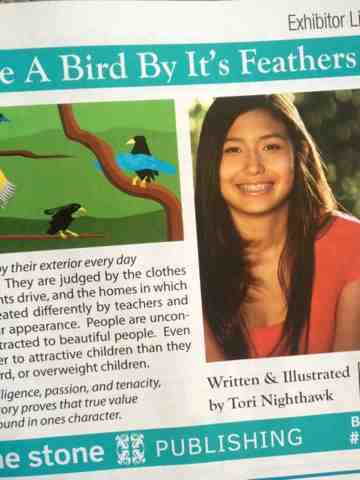 Find the grammatical error. Now I'm changing it to "errors."
Posted by Meghan McCarthy at 12:39 PM No comments:

WHERE DOES MY RESEARCH LEAD ME?

Sometimes my research takes me to places I didn't plan to go to. For example: I was all gung-ho... full speed ahead on my new book idea until I really started digging. The more I dug the more I realized that the guy I was about to write about was not the INVENTOR of the product. He improved it. This is very much like Edison and the lightbulb. Many people mistakingly think that Edison invented the lightbulb when in fact he came up with the long-lasting filament inside the lightbulb. This is how many of our great products come to us--by an evolution of ideas. People are able to patent these ideas. Each time a new thing is added or changed a new patent is allowed. Sometimes this means people get confused as to who the real inventor is.

Anyway, I don't want to say more about what I have discovered yet because I haven't decided what to do with the project. Just because someone didn't outright invent something new doesn't mean that the person didn't create something of value. However, I need to do more investigational research. I am currently tracking down the actual products from the victorian era, if possible, to see for myself if there was enough change and improvement to warrant real credit and merit.

More to come!
Posted by Meghan McCarthy at 4:06 PM No comments:

Posted by Meghan McCarthy at 12:00 AM No comments:

I watched a TED talk on education a few days ago on PBS. One of the speakers, named Angela Duckworth, spoke about "grit." Duckworth is a psychology professor who previously taught math in middle school and high school. She'd wondered why some students succeeded and others failed. It's the  same reason some adults succeed and others fail. Why do some very talented artists never get past art school? Why do some less talented artists get those big gallery shows? Why do some writers become published? Why do other more talented writers never bother to submit their story at all? Duckworth defines grit as,"sticking with things over the very long term until you master them." She wrote an analysis on grit that you can read here. In it she wrote, "the gritty individual approaches achievement as a marathon; his or her advantage is stamina."

It's funny because she says that IQ is easily testable but grit is not. She also said in her talk on PBS that she hasn't concluded how to teach "grit." I would like to inject my own opinion here and say that perhaps you cannot teach grit. It's something you're born with.

I will say that even though I do think you're born with it I think teachers can certainly encourage all kids to be more gritty. I don't know how well it will stick with everyone. I just know from experience that you can't force someone to do something that they don't want to do. My sister has a lot of untapped talent but there's no amount of pushing that will get her to continue to write or submit a story to anyone. What teachers can instill is a confidence in children and I think that'll go a long way to adding that grittiness that is so needed.

Posted by Meghan McCarthy at 12:08 PM No comments:

Sorry for the silence. I've been traveling quite a bit. But back to business. I've seen some great books that I'd like to share but first I want to briefly talk about the situation with B&N and S&S. This really bothers me. B&N is asking that S&S pay more money to display its titles and it wants a higher discount for S&S books. S&S doesn't want to give in to BN's demands... so... BN has limited its stock on S&S titles in its stores. This, to me, seems like a monopoly. BN doesn't have any competitors any more (not brick and motor stores anyway) and now has decided to make these demands because it can get away with it. Why not? Borders isn't around any more to say, hey: we'll take your books for the standard deal.

I read an article that pitied BN, saying that Amazon was a big competitor so now BN needs to get its money in other ways. I have a different perspective and this is coming from experience. Trust me. BN is making TOO MANY MISTAKES and this is its own fault. Because BN is making these mistakes, publishers shouldn't be punished.

1) Amazon has a far superior search engine. Books are easy to look up. You can misspell things and still find what you're looking for. Go to BN and try to look up something when you get the title slight wrong or you misspell the author's name wrong. Ooops! Nothing comes up. This has been like this for years! BN has had PLENTY of time to hire the right people to fix this. They haven't. Mistake number one.

2) Trying to compete with the likes of Apple. Apple has been around for a good long time and makes amazing products. It's unclear to me as to why BN thought it could come along and produce a product in a few years and think it could compete with that. Loss of market share there.

3) BN has no competitors and sells books yet it instead has decided to focus on toys, soap, dumb gift items, and so on. The one thing BN has that Amazon and other online retailers do not have is BOOKSELLERS. People who are there to recommend great new titles and HANDSELL. But instead of advertising that key element... instead of making sure that the good and knowledgable stick around, they treat the employees like inconsequential elements: people who are there to stock shelves and pick books up off the floor. BN could be a force to recon with if they got the right employees and advertised as such. Heck, they even HAVE some but don't care to use them properly. Example: having a trained opera singer working with the literature books even though she asked to be put with the music. Having a school teacher working with travel books. Huh? The stores aren't run right. It's sad. It could be game over faster than it has to be.

I'm siding with S&S on this one. Sorry BN.
Posted by Meghan McCarthy at 12:06 PM No comments: