PAGES TO WORK WITH

My books are usually 40 pages. But of course I have the endpapers and the title page and the author's note so there aren't as many pages as one might think to work with. It always frustrates me when I see a review that says I should have added another page for this or that. I can't!

So I've been using my ipad some more. It's awesome at my new gym because I quit New York Sports Club because I'm trying to save my money. The Sports Club was 90 a month. The new gym is 50 for 6 months! Yeah! Anyway, there are some missing perks, such as TVs on the backs of the machines. So the ipad comes in really handy. So I've been using it as my TV.

Here's something I find annoying: I've been reading my first ibook on it (Wonder) and I'm sometimes distracted by the reflections in the screen while reading in the subway or while at work in the break room. With a BOOK you don't get any of that! So that's one plus for paper. I'll be taking the ipad on vacation with me on Tuesday so I'll report back to say how that goes. I will say it's going to make packing SO much easier because I don't have to try to fit in a million books!

Another cool thing is that I just got a bunch of free ibooks that are in the public domain. One is very old and over 1,000 pages that I'm using for research for a new book. Very cool.


Posted by Meghan McCarthy at 12:03 PM No comments:

SOOO...GUESS WHO GOT AN IPAD? 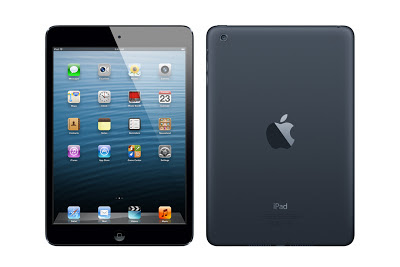 Yes, I did. The person who has ranted and gone on and on about the evils of the digital age has purchased one. Perhaps you're wondering why. Well, this is how it went down:

Me in the morning:
Normal routine. Went to turn on the computer. It didn't turn on. I plugged it in. The computer still didn't turn on. I noticed that the little light on the plug wasn't on. I tried all sorts of outlets and things and I tried on and off for hours before I accepted its fate: the cord was broken.

Me in the afternoon:
At the apple store. My mission was to go right to the cords but I got a little lost and started playing with the devices. What I was so excited about was garage band. The instruments worked with the touch pad feature, which doesn't do that on my laptop. It just so happened that I was trying to finish my video and was having trouble with the music part. Oh wouldn't it be great to have this new tool!

So when I asked for a cord (75 dollars! What???) I asked how much the ipad mini was. It played nice videos on it and could upload photoshop...I could put my presentations on it... and it was 300. Hmmm. So I said I was just going to buy the cord and believe me the guy didn't not try to sell me one... but I slowly opened my mouth and said, "And can I have the ipad mini?" Eeek! What?

So that's why I have one. Impulse purchase!

Anyway, I downloaded some sample graphic novels on it because darkhorse gives you some for free. They look GREAT. The last time I looked at stuff on the Nook (or rather NOOK - no "the") I was hugely disappointed because you could change the font sizes and the illustrations were in the wrong spots... but none of that here. Go apple! I was not surprised of course. Apple products are great. Expensive, but great. So I've been reading the graphic novel on the subway here and there. I think it's great for travel. I don't have to lug my heavy books around with me... especially when I'm trying to pack light on a trip! There are some things lacking though. Some graphic novels print on mat paper. This tactile bit is missing. And I think that's a big one. Also, it's kind of annoying to have to blow up the image and then resize it and then make the page flip (the page flip is a little sluggish and that irritates me).

So my conclusion is this: great for travel. Great when you don't want to ruin your precious hardcover that you want to collect. But it lacks some of the parts that make reading fun: the page flip, the paper weight, the fact that some graphic novels are printed on mat papers, and, of course, the cover design, the flaps, the endpapers... the whole design element is missing.


Is it a nice thing to have? Yes. Will it replace my purchasing of graphic novels in print? No. 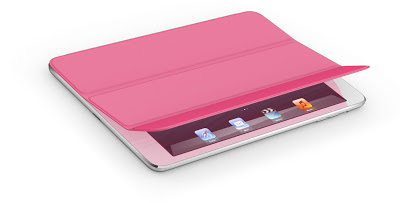 I did buy a nice pink cover to go with it.
Posted by Meghan McCarthy at 12:39 PM No comments:

I don't think I posted any photos of how much we had to shelve during the holidays. Customers left books ALL over the floor. Below are photos of the books we'd collected during just a half a shift. And beleive me... it got a LOT worse than that. 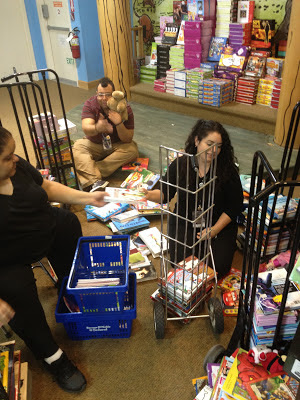 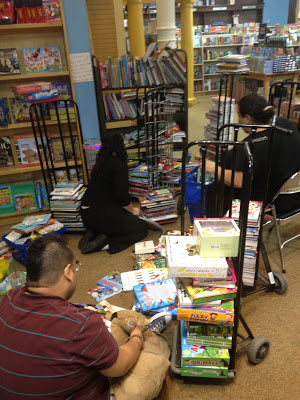 The cart at the back was too full so we had to use v-carts. By the last week before Christmas I think we were up to 8 or so carts. Ugh!!!! My back hurt so much.

Posted by Meghan McCarthy at 12:40 PM No comments:

NOT YOUR INTENDED AUDIENCE?

As Betsy Bird put it: I have a doppelgänger. She is a writer for My Little Pony. You can read all about it on my other blog. My Little Pony was intended for little girls. It's pretty obvious when you watch the show. I tolerated a few minutes of one episode on YouTube. It's very pink, very girly... and there are talking, flying ponies. Enough said. On my blogpost I said how there is a huge cult following of "MLP" called "Bronies." Bro - nies. Get it... "bro" meaning adult males totally dig this show. Yeeeah.

So this brings me to my thought. In teen lit there seems to be a lot of cross over going on. Just look at Hunger Games. It seems that the children's arena may have an untapped marked yet. Who knows where this may take us next. Who knows what cult following might pop up! Harry Potter has fans of all sorts. I'm curious to know what book will hit it big with the adults. I'm keeping my eyes open!
Posted by Meghan McCarthy at 4:01 PM No comments: 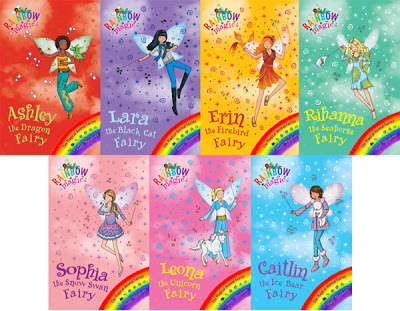 Ahhh! The fairy books. They drive me nuts simply because I have no idea how to shelve them. I don't know what series goes first and I don't feel like staring at the covers to figure out whether it's the ocean fairy series or the party fairy or the sports fairy series or music fairy or night fairy... you get the point. The problem is, like with a lot of these chapter books, each book in the series is not the same color and does not have an identifying mark. It drives me nuts. So a lot of times I just don't give a crap. I shove the book approximately where it goes and walk away.

This brings me to a regular customer I get who comes in to shop for her granddaughter. She wants all of the new fairy books... only she doesn't know which ones are new and which ones she has and doesn't have and can't tell the difference between them. Neither can I. She's also aggravated by the fact that all of the books are essentially the same only with different characters. I think she said something about them not being creative and she asked why authors don't make more original stories. No comment.

Posted by Meghan McCarthy at 10:07 PM No comments: