I came upon a book a long time ago at the Strand in a pile of used books. IT was called THE MAN WITH THE CAN - the art of Jan Sanders. He was born in 1919 in the Netherlands.

When I flipped through the book I immediately got stuck on this image. I knew this picture! 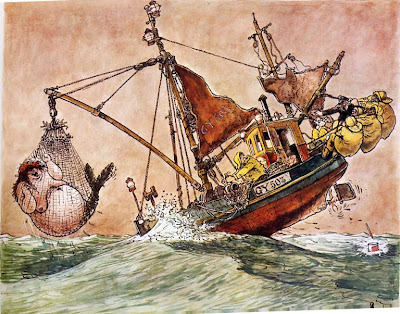 It was extremely similar to ONE MONSTER AFTER ANOTHER (1974): 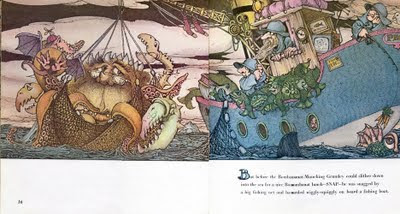 It seems to me that Mercer Mayer had seen Sanders's cartoon and either consciously or unconsciously decided to make an image similar. Was it a joke? An insider joke? Was Sanders's work really popular at the time - a joke that many adults would recognize? Or did he see the image somewhere and file it away and then think it was his own? Either way I love both images!
Posted by Meghan McCarthy at 2:21 PM

Email ThisBlogThis!Share to TwitterShare to FacebookShare to Pinterest
Labels: cartoons, Jan Sanders, Mercer Mayer, One Monster After Another