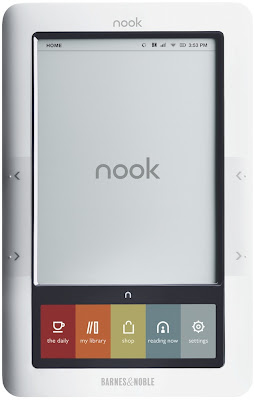 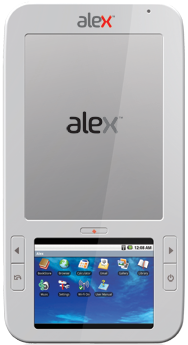 B&N is being sued by Spring Design for "stealing" design features now existing in the Nook. I'd known about this for a while and had read the actual court documents via Wikileaks. But apparently the lawsuit is going forward. The judge this month said there is enough evidence to go to trial. I don't like this!!! (I have my reasons).

FROM PC WORLD NOV 2009:
"According to court documents, Spring Design first presented their design for Alex to a Barnes & Noble consultant on February 17, 2009 – five days after both sides signed a non-disclosure agreement. On March 20, Spring Design met with Ravi Gopalakrishnan, head of B&N software development, who allegedly told Spring executives that B&N wanted a product that would compete with the Kindle.

"In April and May, Spring Design met with other B&N executives, including William Lynch, president of B&N.com and Kevin Frain, B&N's CFO. Lynch and Frain were given a product demo and shown a PowerPoint presentation for an Android-based e-reader known as Alex.

"Lynch warned Spring's Albert Teng that he should not consider Amazon as a content partner, because Amazon was likely to steal Spring's unique idea without ever buying anything from Spring," according to court documents.

"Thanks for coming and showing us your innovative work," Lynch wrote in an e-mail after the meeting. "Kevin [Frain] owns these partnerships and I know he's excited to work with you. Looking forward."

In July, B&N requested a summary of Spring's product development and on October 1, B&N had a meeting with Spring's CEO to discuss possible revenue sharing for Spring's Alex device in the university textbook market."

LAW 360 SAYS:
In his Dec. 27 opinion Judge Ware said the evidence B&N and Spring submitted showed "extensive dispute" over whether prior e-reader devices had "disclosed all aspects of plaintiff's trade secrets" and that the evidence was divided on whether B&N had developed the Nook independently.

"Comparing the specific features of the Nook with [Spring's] alleged trade secrets is a fact-intensive task best left to a jury," the judge said.

In December 2009, Judge Ware denied Spring's motion for a preliminary injunction in the suit, allowing B&N to market the Nook while the lawsuit continued. At the time, the judge found that Spring had not shown sufficient likelihood of success on its merits or that an injunction would be in the public interest."

What will become of all of this? What if B&N couldn't make the Nook anymore? Would they go back to focusing on what they did prior? PRINTED BOOKS? What if what they owed was too great? Can the industry survive without this giant? I know on a personal level I cannot. Hmmm.

My own vote is that the Nook looks far better than Alex design wise. So whether features were taken or not, they definitely improved upon things. And as you know, I'm not a fan of e-readers - but if I HAD to pick one, I would pick the Nook. It looks better. I always go by looks. I would pick the iPad but it's too big/heavy to carry around and therefore doesn't work for reading purposes. It works more as a laptop without the keyboard.

What would you pick?
Posted by Meghan McCarthy at 1:18 PM