I'M ALL WORN OUT

Maybe you know this book or maybe you don't but it's written by Chris Colfer, who is one of the actors in Glee. Well, his name is on the front so let's presume that he wrote it. 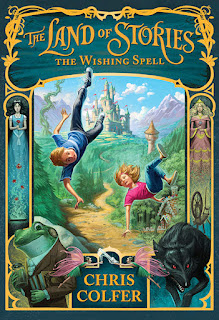 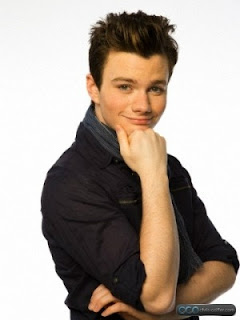 Now, imagine a scene where I am at a bookstore stacking large quantities of the above actor's books, over and over again. I was in the process of making a very lovely arrangement (you need to alternate the books - spine out, spine in, etc) when a shopper approached me and asked, "Have you been doing this a lot today?" "Uhhh..." I said. I honestly had no idea what she was driving at. Was SHE the one who was knocking over the stacks of books? Was SHE the one who was leaving them ALL OVER THE FLOOR? "Well have you found any sticky-notes in them?" "Sticky notes?" I really thought she was sounding a little batty. I'd already dealt with too much of it that day. Earlier the stack of books had already been knocked down (I saw the woman do it - she was wearing a very conspicuous hat) and then she came back to ask if she could help me re-stack them. I had no idea what was going on. "Sticky notes?" I asked. "It was on twitter today," she said. Chris Colfer tweeted that he hid notes in some of the books he signed... and since he did a signing here people are going to look here first. Fans are going to be going crazy." "Ooooh, so that's why the stacks keep getting knocked over and the books are all over the floor. The adults are doing it. They're looking for the post-it notes." The shopper suggested I leave a sign next to the books noting that there are no sticky notes in the books (since she already checked). 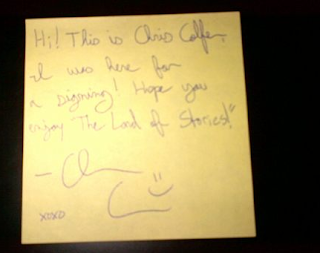 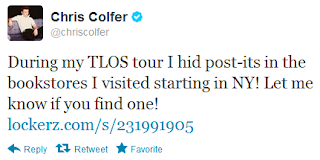 All I have to say is this: It may seem like a great thing to do and but it gives booksellers a really hard time! They don't want to have to go through piles of books that customers leave all over the floor because they're going crazy looking for a post-it note that they may or may not find! In this instance... NOT!