RESEARCH CAN BE STRESSFUL! BUT ALSO FUN

I was in Washington D.C and stayed with my aunt in Virginia so that I could do research for my latest book on Betty Skelton. My little sister went with me to all of the museums. Below you can see the scale of Betty's plane in comparison to my sister standing below. (actually, the red plane you see here wasn't Betty's plane but it was a Pitt's Special, which is what she flew). I had NO idea that the plane would be so small! 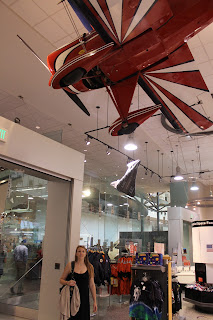 We asked the man at the desk where the plane would be and when he said, "In the gift shop." We were like, "Huh?"


This photo is of Betty's plane. the coloring is different than the red one above. Otherwise the two planes are the same. 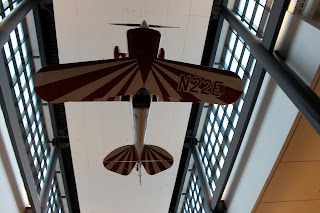 So I went to the Air and Space Museum in Virginia to view the Betty Skelton collection by appointment. It was SO overwhelming! The museum is a huge hanger type place that houses thousands of airplanes (or maybe hundreds... but it seemed like thousands). I was walked all the way to the back and past a huge space where people restore old planes and into a library hidden away into a corner. I was told that I could sit at a table of my choosing and then a large cart was wheeled out with a selection of boxes on it. Inside of each box was a long row of files and each file would say something like, "1935-1950." Then there would be files on cars and water sports and the Blue Angels... and it went on and on. I watched the hours go by and realized that if I did not pick up the pace I would not be able to get through everything! My beginner mistake was trying to read or skim the articles at first: 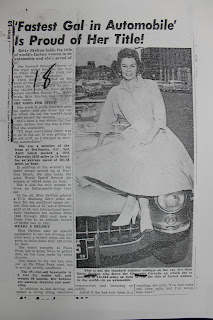 Then I started photographing everything without doing much reading. Now, I did read the agreement that said that I was not to photograph the photographs. However, I went in for the express purpose of getting photo references. I am not going to publish the photographs I obtain, I simply need to reference them. So... I frantically began photographing everything in the hopes that I wouldn't get caught. My heart was racing! In the agreement it said I could photograph news articles if I did not want to use the copy machine so I would coyly hide a stack of photos under the articles. I felt so BAD. Not bad as in guilty but bad as in CRIMINAL. At some point the man at the desk got some phone call that sounded personal... about his mom... and he walked over to another guy and said that he had to leave. That's when my photo taking ended. The other guy was more serious. He told me that I had to use white gloves to handle the photos and explained to me what the agreement was--that I couldn't photograph the photographs. No! So I did what any desperate illustrator would do: I got out my iphone and hovered it over the photos and used that since it didn't make a camera clicking noise. I HAD to take the photos of Betty training with the astronauts. I HAD to! That's what I came for!

Anyway, I left armed with plenty of material. I was definitely drained for the day. It was very stressful. Doing something you shouldn't do for hours can drain a person, you know? But it's all for the love of the book!

Posted by Meghan McCarthy at 10:54 AM