Apparently racism has made its way to the Hunger Games. Some "readers" were shocked to find that some of the characters in the movie were black. Here are a few of their tweets:

"Why does rue have to be black not gonna lie kinda ruined the movie"
"Why did the producer make all the good characters black?"

See, if they really READ the book, they would have noticed the line that describes Rue like this: “She has bright, dark eyes and satiny brown skin.”

A few weeks ago my little sister told me that she read The Hunger Games on the plane in one shot. So I decided to give it a go. I'm getting really into the it. And judging by the looks of the characters, the casting seems perfect. I pictured Rue as being really cute and how could you not think this actress is cute? 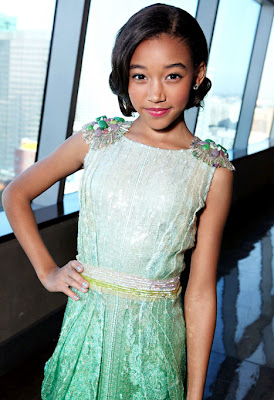 I also am interested to see how Lenny Kravitz is in his role. I think I could see it working.

I'm never suckered into watching the movie version of books but I may actually be this time. I wonder if the movie version will do what the book is doing (from what I've read thus far) and not really getting all that into the gory details of death... and thus far much into anything sexual... or are they going to spice things up for adults?

But back on topic here: I hope these racist individuals learn that there are other people in the world besides themselves. Life sure would be boring if everyone looked and acted the same. And if everyone acted like them I'd want to move far, far away.

One more thing: I don't like to stoop to name-calling here on the blog because it's immature but the tweeters deserved it.
Posted by Meghan McCarthy at 12:45 AM