THE BATTLE OF THE ILLUSTRATION 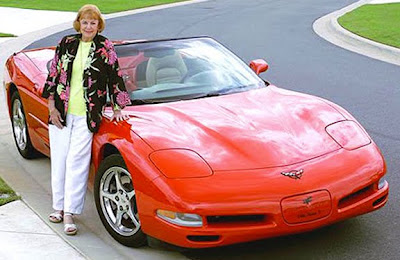 My new book is about Betty Skelton. The illustration I wanted to work on showed Betty in her older years next to her Corvette. My editor and designer suggested that she be in the car, driving it. Fair enough. ONLY this is when the problem developed. When I began the painting I hit a snag. Illustrating Betty driving in the car from left to right, driving off of the page means that you can't see her face because the windshield obscures it. Some of you may not know this but in publishing action is generally illustrated from left to right, so that the action is moved forward--the drama of the page turn. I asked if the car could be flipped in this instance so that the car is driving from right to left but the answer was "no."

It's hard being an illustrator! So now I have to find a new illustration idea - what else did Betty do in her 80s that was action-packed? I'm not sure. My editor suggested sky diving, which I guess she did into her later years but I'm not sure that she did all the way into her 80s. The thing with sky diving is that your whole face is obscured with goggles and a helmet so it's kind of just as bad as the Corvette situation. This last spread is my opportunity to show that she's much OLDER but still doing things. If her face is completely obscured then what's the point?

Illustrations constantly pose problems like this. I don't think people realize that this goes on. But now I'm telling you! It's a constant battle.
Posted by Meghan McCarthy at 12:04 PM