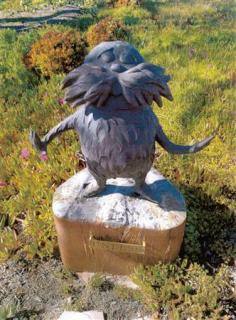 The Lorax statue went missing from its San Diego estate on monday. The surprising thing is that the bronze statue weighs 300 pounds! That's one hard thing to steal. Police are trying to determine if the theft is related to a movie that is currently in the theaters... or was the theft money related? If the metal is melted down it could be worth some money.

"We don't know if it's just a prank because of the recent release of the movie or if someone thinks it's going to be worth a buck or two because it's a lot of (metal)," San Diego Police Lieutenant Andra Brown said. The police said there is evidence that the statue was rolled down hill and into a truck waiting at the bottom. "We're just hoping that the suspects return it," Brown said. "The Geisel family is just asking that it be returned and they don't want to pursue the matter any further. Which is not to say the police won't."
Posted by Meghan McCarthy at 12:33 PM