I haven't watched Hugo Cabret yet, but viewed a long preview on Netflix and I saw the wonderful automaton creation the boy was hiding. This brings me to want to share the creepy yet wonderful real-life automaton that is at the Smithsonian:

He's a clockwork monk that moves and prays, build in the late 1500s! 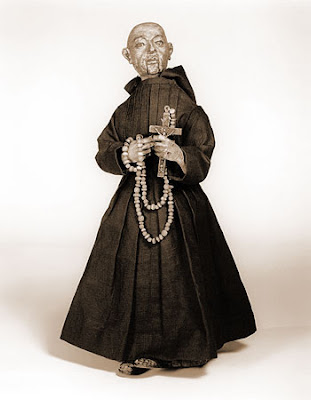 Elizabeth King, a sculptor who has been studying the monk wrote:
"In the Smithsonian Institution is a sixteenth-century automaton of a monk, made of wood and iron, 15 inches in height. Driven by a key-wound spring, the monk walks in a square, striking his chest with his right arm, raising and lowering a small wooden cross and rosary in his left hand, turning and nodding his head, rolling his eyes, and mouthing silent obsequies. From time to time, he brings the cross to his lips and kisses it. After over 400 years, he remains in good working order. Tradition attributes his manufacture to one Juanelo Turriano, mechanician to Emperor Charles V. The story is told that the emperor’s son King Philip II, praying at the bedside of a dying son of his own, promised a miracle for a miracle, if his child be spared. And when the child did indeed recover, Philip kept his bargain by having Turriano construct a miniature penitent homunculus."

Go HERE to listen to a fascinating and well worth-it RADIOLAB piece on the subject. It's great! And creepy. I love creepy.

Here you can view silent documentation of the monk. Wonderful.