SOLOMON AND THE RUSTY NAIL

My roommate showed me a book he got the other day. It came from Amazon. It's a used copy by William Steig that's clearly from the library. 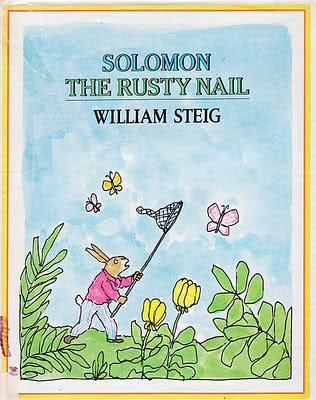 "It's in great condition. Why did the library not want this anymore?" I wondered. 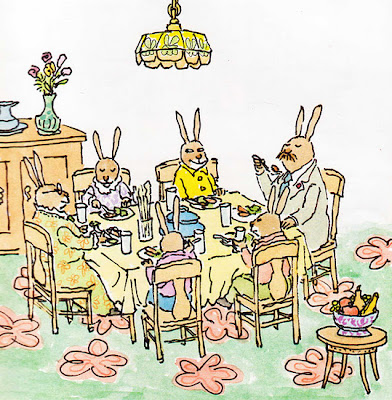 An odd sort of story idea, yes, but I was willing to go with it. It gets tense when Solomon meets a very scary cat wielding a sharp dagger. Solomon turns into his rusty nail self so that the cat can't eat him.... 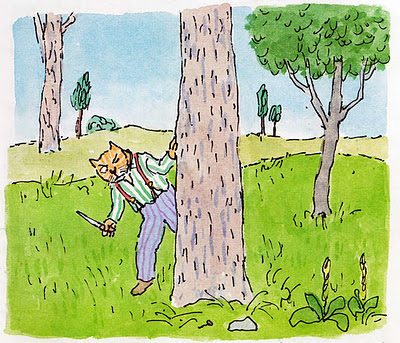 This is when I thought to myself, "Hmm, this would NEVER get published today."

The story gets really odd. The cat kidnaps Solomon, AKA, "the rusty nail" and keeps him locked up. 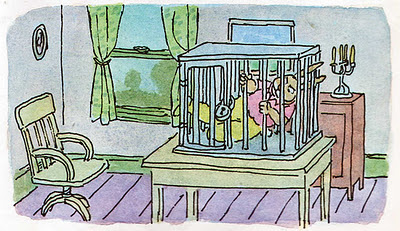 Solomon refuses to turn back into himself because when he does he will be eaten. Only at night does he become his bunny self, when it's safe to attempt to escape the cage. The cat gets frustrated by the length of time Solomon remains in his rusty nail state, so he takes him out of the locked cage - in rusty nail form - and hammers him into a board in his house. There Solomon is trapped... forever?

The story is really ridiculous. There's also some sub plot about Solomon liking to catch butterflies... I would definitely edit it down because it's clearly all over the place, but it does have a sense of fun that I think a lot of books now are missing. Are children's books losing their playfulness because editors are playing it too safe? Or do books need to play it safe? Do children today need to be aware of the dangers rusty nails and cats wielding daggers?
Posted by Meghan McCarthy at 11:43 AM

Email ThisBlogThis!Share to TwitterShare to FacebookShare to Pinterest
Labels: Solomon and the Rusty Nail, William Steig