I was listening to WAIT WAT, DON'T TELL ME on NPR this morning, and Jack Gantos - winner of the Newbery this year - was a special guest. He told his tale that was written about in this book: 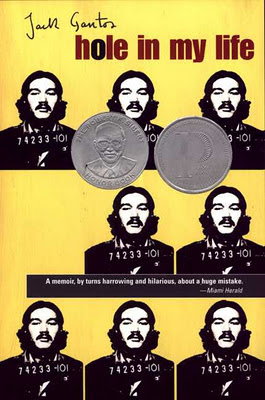 I had no idea until now what this book was about! Crazy! He became a drug smuggler and at one point was pushing shopping cart of pot down the street!

When the NPR piece is posted I'll put it up on here if I can because it's quite funny - and amazing - and shocking.

Amazon.com Review
"I find myself moving like a knife, carving my way around people, cutting myself out of their picture and leaving nothing of myself behind but a hole." A gaping hole of misery is what popular young adult author Jack Gantos remembers when he thinks back to 1972, "the bleakest year of my life." Just 20 years old, Gantos was in a medium security prison for his participation in a get-rich-quick drug scam. Scared silly by the violence he saw around him daily, Gantos's only lifeline was a battered copy of The Brothers Karamazov, which he painstakingly turned into an impromptu journal by scratching his own thoughts into the tiny spaces between the lines. There, he recorded both his fears and his dream of someday writing a book of his own. Before prison, Gantos had penned a scattered myriad of journals, but had never been able to pull them together into a cohesive narrative. It was during his time behind bars that he found himself growing into a focused, diligent writer who eschewed drugs for the bigger high of watching his words fill the hole once and for all.
Gantos, best known for his award-winning Joey Pigza titles, mines darker material here that is as deeply compelling as his lighter fare. Using short, meaty sentences, Gantos manages to write in a way that dismisses the dubious "romance" of prison, drugs, and "life on the edge" without ever sounding didactic or heavy-handed. Older teens will appreciate his candor and sheer willingness to give them the straight story. Vigorously recommended. (Ages 13 and older) --Jennifer Hubert

This got me to thinking about my graphic novel memoir again. Several agents said if I did it I would ruin my reputation. There are a few parts that are kind of crazy - I get car jacked for instance (this really happened when I moved to NYC) and some other things. But I'm thinking of simplifying some of it and trying again. The point of my graphic novel is to show that you can go from nothing and keep trying until you accomplish your goals - in my case it was to get published.

So anyway, when I get to work on Sunday (the bookstore) I"m buying Gantos' book! I've got to read it!
Posted by Meghan McCarthy at 11:44 AM

Email ThisBlogThis!Share to TwitterShare to FacebookShare to Pinterest
Labels: A Hole In My Life, Jack Gantos, Newbery