TROUBLE FOCUSING - AN INTERVIEW WITH MY MOM

I am writing about the same thing on the Blue Rose Girls today because it has taken me a LONG time to put this together. I have finally uploaded the finished interview with my mom on reading, with images and all!

This is the sample I put on the BRG:

ME:I remember when I asked you to read my first attempt at a novel. You said something like: “Bridget is the writer in the family. You should stick to art,” or some such. You later explained why you said that. You really thought my writing would be terrible and was trying to save me from embarrassment. But this is why I ALWAYS ask you for advice on my writing before anyone else--because you are honest and I value your opinion. I think we have the same taste in writing and art. Sometimes honestly is hard to swallow, but it always works out for the best. What did you think of my early writing attempts? You can be honest. I won’t cry.

MOM:I think you struggled with writing in school for the same reason that sometimes made it hard for me to figure out what you were trying to tell me in everyday conversation. You tended to start telling me something as if I was inside your brain. I remember having to ask lots of questions to figure out where your ideas were coming from. This is a really simplistic example; "Mom, she was there when it happened." And I would be totally puzzled and have to say, who what where and when. Consequently your writing was confusing. I think you also had trouble organizing. Remember your little index card to help with a math test. You were allowed to bring one index card with some helpful facts to a math test. You filled both sides with microscopic letters and numbers with no spaces between them. It was like looking sanskrit . 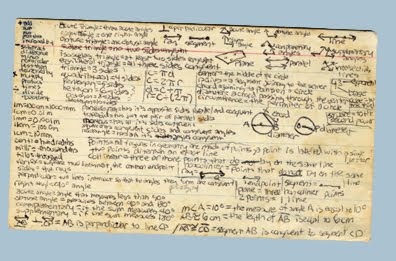 Your notebooks came home with huge holes where you must have erased right through the paper. I used to marvel at them. 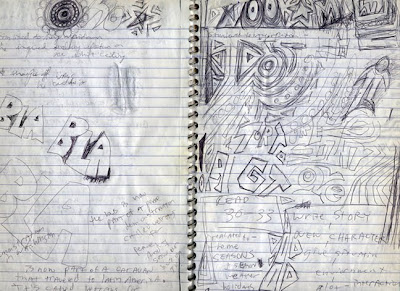 Basically your attempts to help yourself learn, produced chaos. So I was astounded when you began to write coherently. when you were in your twenties. I think that part of your brain just matured late."

The funny thing is that just the other day I asked my friends if I still do that... if I start talking about stuff and don't explain what I'm talking about. They said "yes." I mentioned it to them because I fear that I'll do that when public speaking... that I'll start talking about something and not explain myself and not make any sense to people! In my brain I make TOTAL SENSE. But I guess to the outside world I make none? I also worry about this because I have done a few radio interviews and you really have to think on your toes. Will I say things that don't make any sense then? I don't know if this is just me or all A.D.D people have this issue. It's funny but my taste in books reflected that. My sisters loved books that made more sense and I loved the the crazy books that were all over the place -- like In the Night Kitchen and One Monster After Another. It was like my brain had come alive via the page!

To read the whole interview go here!
Posted by Meghan McCarthy at 2:15 PM

Email ThisBlogThis!Share to TwitterShare to FacebookShare to Pinterest
Labels: interviews, my mom