SOME WORDS FROM SENDAK 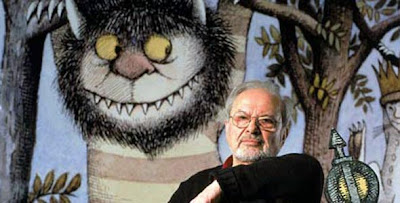 What makes a good kids' story?
Sendak: How would I know? I just write the books.

The monsters (in Wild Things) were based on adults, right?
Sendak: The monsters were based on relatives. They came from Europe, and they came on weekends to eat, and my mom had to cook. Three aunts and three uncles who spoke no English, practically. They grabbed you and twisted your face, and they thought that was an affectionate thing to do. And I knew that my mother's cooking was pretty terrible, and it also took forever, and there was every possibility that they would eat me, or my sister or my brother. We really had a wicked fantasy that they were capable of that. We couldn't taste any worse than what she was preparing. So that's who the Wild Things are. They're foreigners, lost in America, without a language. And children who are petrified of them, and don't understand that these gestures, these twistings of flesh, are meant to be affectionate. So there you go.

Sendak: I remember I was having fights with my editor about this book.

What were the fights about?
Sendak: Well, I'll just give you a silly example. The entire staff at the publishing house were keen on my changing the word "hot" to "warm" on the last page. Because "hot" meant "burn ...." It was going to burn the kid. I couldn't believe it. But it turned into a real world war, just that word, and I won.

How did you win?
Sendak: Just going at it. Just trying to convey how dopey "warm" sounded. Unemotional. Undramatic. Everything about that book is "hot."

Do you think Disney is bad for children?
Sendak: I think it's terrible.

What do you say to parents who think the Wild Things film may be too scary?
Sendak: I would tell them to go to hell. That's a question I will not tolerate.

Because kids can handle it?
Sendak: If they can't handle it, go home. Or wet your pants. Do whatever you like. But it's not a question that can be answered.

Yeah, Sendak can be a bit bold and grumpy sounding... but I got these bits from an interview about his movie that was a few years back from NEWSWEEK. It's pretty interesting. Read the whole thing here.

I have to admit that I didn't like the movie. I really liked the way the monsters looked but my liking of things ended there. I remain a huge fan of the book. I have yet to see a good rendition of a picture book. I don't think it's possible.
Posted by Meghan McCarthy at 1:40 PM

Email ThisBlogThis!Share to TwitterShare to FacebookShare to Pinterest
Labels: Maurice Sendak, Where the Wild Things Are