THE BAD AND THE UGLY HAVE MET BORDERS 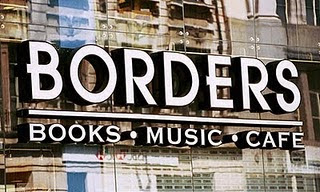 Say goodbye to the Borders chain. It's over. “I think it’s horrible that Borders is closing,” said a customer from Naperville. “It’s a sign of the times that video games and electronics are taking precedence over books in our culture." That is a scary thought, isn't it? What does this mean for B&N? No competition? I read that employees are not allowed to discuss when final sales will occur. Almost 11,000 people will lose their jobs, which is a sad thing. How did B&N survive when Borders failed? NPR suggests that one reason may be that BN put its money into digital investments. While B&N was busy building its website, Borders outsourced its online sales to Amazon. That was a huge mistake, as this customer explains: "I'll go to Borders to find a book, and then I'll to go to Amazon to buy it." Borders hadn't made a profit since 2006 says NPR. NPR concluded with this interesting theory: "With Barnes & Noble staking its future on digital technology, Raff says, it's likely the big bookstore will only live on in big cities."
Posted by Meghan McCarthy at 11:09 PM