GO THE F TO SLEEP A COPYCAT?

I saw this circulating digitally about a month ago. I must have gotten it two or three times in the same day from different people. It was a link or PDF and I was able to read the whole book. Then, the other day, I saw the book on one of the main tables on the first floor at Barnes and Noble in Union Square. 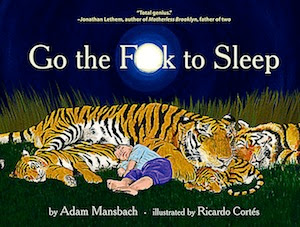 It's a parody of various children's books - and a parody of parenting in general - basically - why won't the kid just go to sleep! I thought the joke went on a little too long. I got it on page two. This is my personal opinion of course. At any rate, I just read that there's another book that people are claiming to be the original inspiration for the book:

(Image from It's Time To Sleep, My Love)

The author of "Go the F to Sleep" is claiming that he knows nothing of this book. It is true that many themes come up again and again and coincidences happen. Although, the two images are very similar. I say, if it was your inspiration own it! Parodys are legal. I've seen multiple Good Night Moon inspirations.

All I'm saying is, if you did something on purpose, then own up to it. If not, then I guess just keep doing what you're doing.

I read one comment that said that a reader hoped that this book wouldn't get shelved in the kids' section. If it did, she said it would be awful. I suppose so, though the F word is never used and booksellers SHOULD be careful!
Posted by Meghan McCarthy at 5:20 PM

Email ThisBlogThis!Share to TwitterShare to FacebookShare to Pinterest
Labels: Go the F to Sleep, It's Time To Sleep, My Love