I just bought this book at B&N. I'm not into promoting one book store over another but it's a bargain book right now and I got it for 7 something. Online it's 7.18. It's an out of print book and unavailable on Amazon. 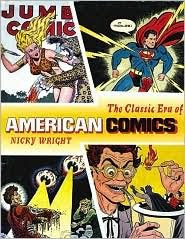 If you're interested in the evolution of comics and graphic novels or just want to look at a bunch of pretty covers I recommend getting it! My coworker is Mr. Comic and went through the book with me. He explained all sorts of fascinating things that were in the book - how there was a law passed and on the books for a long time that controlled the content of comics. It started with this book: 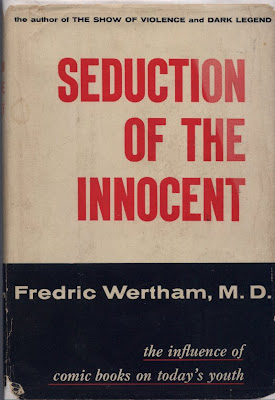 It was written by Dr Fredric Wertham, MD. In it he printed the most shocking comics he could find, implying that they will warp children's young minds. He wrote "By and large much younger children read crime comics (he called all comics "crime comics") than is commonly and conveniently assumed. Crime comic books are available almost anywhere. Any child who meets other children has access to them. They are in kindergartens, pediatric clinics, pediatric wards in hospitals. They are in play grounds and schools, at church functions and, of course, in the homes of the child or his friends." Wertham's book created an outrcry. Comic vendors were threatened. They removed the comics. In 1953 a Senate Subcommittee to Investigate Juvenile Delinquency was formed. Wertham was invited to testify and he attacked the comic book industry with full force. There were, of course, violent and gory comics, but Wertham lumped ALL comics together--Superman, Captain America, and the rest.

The result was that if the comic book industry didn't clean up their act the Senate would do it for them. So comics had to be approved and have a stamp put in the corner of them that said "Approved by the Comics Code Authority." Scenes with blood, gore, sex, crime scenes, things containing ghouls, werewolves, vampires, walking dead, cannibalism, were banned. Words like "horror," "crime," "terror," and "weird" were banned from covers.
Posted by Meghan McCarthy at 12:00 PM