WAIT AND SEE. This was a favorite book I remember from my childhood. It had a lot of text on it and it was only two colors but it was the mechanical drawings and story that pulled me in. 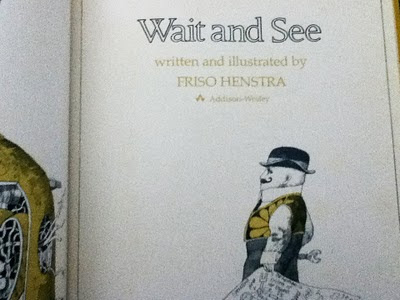 Written and illustrated by Friso Henstra.

Well, he would show them." 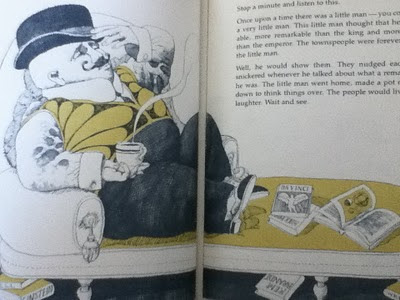 The little man went to the store on the corner of the street. He bought screws, nuts sheet metal, lumber, pliers, a saw and many other things. He locked the door of his workroom and set to work. He built an iron dog.

That dog had an iron mouth, teeth of steel and a tongue of leather...

With a whirring of gears and a rumbling of engines, he roared out the door, one day, on his heavy iron legs. HIs little master ran behind, holding his leash and shouting proudly, "Here comes Mighty Herman and his terrible dog! Keep out of the way!" 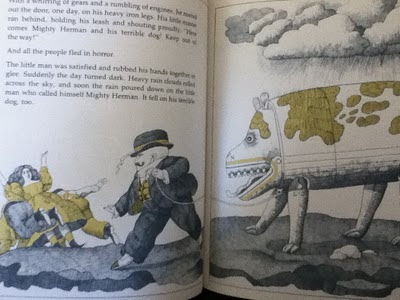 It started to rain...
"Then, with a final screech, the terrible dog stopped stock still. HE stood there like a statue in the rain. The little man stared, with tears in his eyes, as patches of rust appeared on the head and body of the dog. Those patches spread until finally the terrible dog was covered with rust -- rust from head to tail.

And the people began to laugh at the little man. They laughed at his rusty dog, too. That wasn't so nice of them." 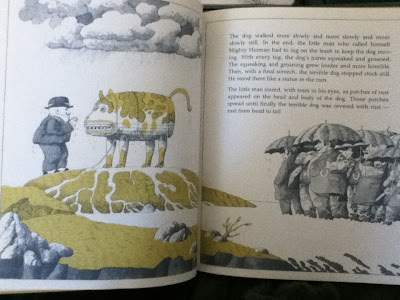 "Full of anger, the little man went home. He put his shoes near the stove, hung his shirt up to dry and sat down to think things over. The people would live to eat their laughter. Wait and see....

He locked the door of his workroom, and he set to work.

He built a rocket balloon. 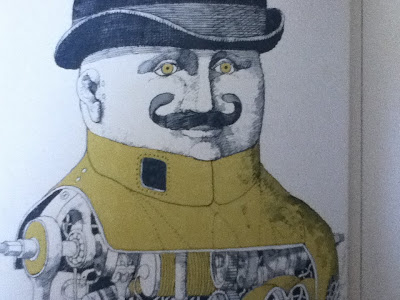 Of course his later experiments didn't work either... 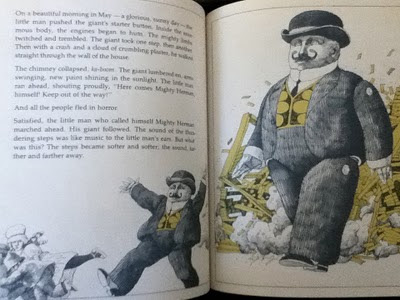 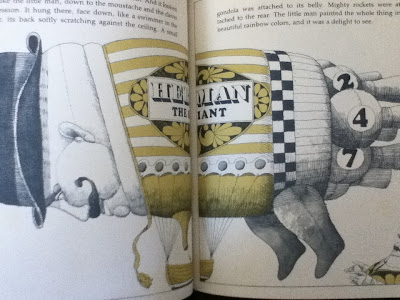 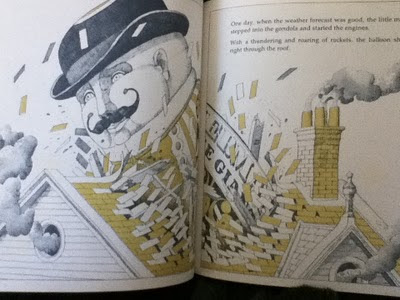 "And the people began to laugh at the little man. They laugh at his lost giant, too. That wasn't so nice of them.

The little man grew pale and thin -- so thin that his trousers began to droop. He had to hold them up to keep them from slipping right to the floor. Finally he took some steel wire. He bent it, so, and made two small clips to pin his trousers. 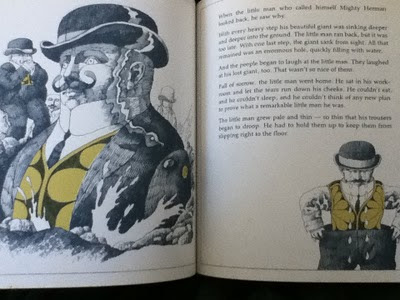 "Oh look!" people said. "Aren't those hand? We could use them very well when a button is missing or a baby's diapers need pinning. THOSE pins are SAFE.

So the little man became the inventor of the safety pin. The king gave him a metal... 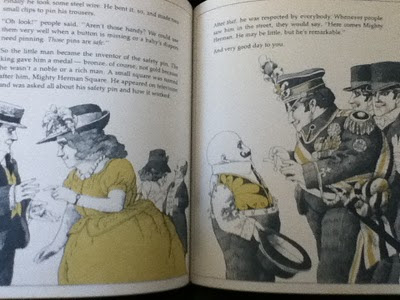 I just loved this book. I loved imagining making my own ships and metal dogs! And l loved that the little man never gave up. It's sad that books go out of print but they don't disappear if you save them and share them with others!
Posted by Meghan McCarthy at 12:51 PM